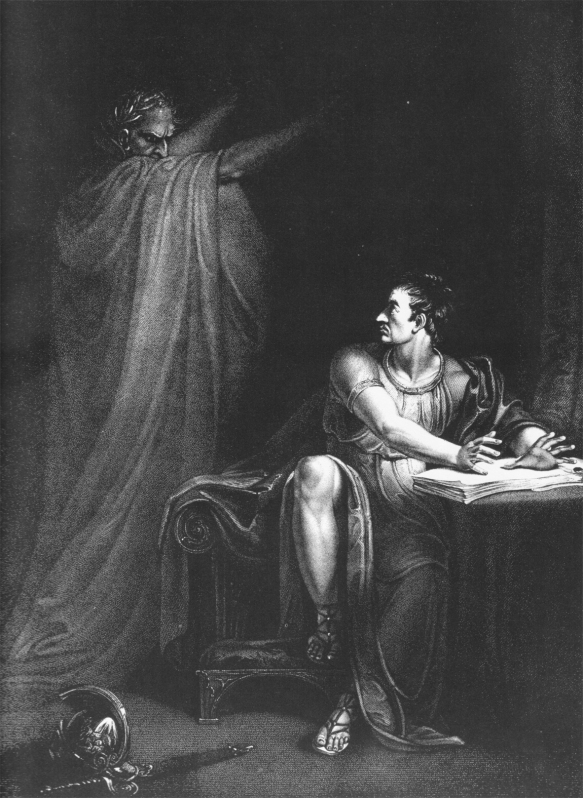 The angry ghost of Caesar appears to Brutus

Looking for a definition, I found in the Oxford Companion to English Literature that a ghost story is a narrative that has as its central theme “the power of the dead to return and confront the living.”

This definition captures the heart of this kind of story, but it leaves out such supernatural creatures as demons, witches, and other spectral creatures that aren’t the returned dead. The Oxford entry goes on to cite “Green Tea” as an example of a ghost story, and yet it must be pointed out that the demonic monkey is certainly not a ghost. I would group stories of ghosts and demons together as “ghost stories.”

Should Poe’s “The Tell-Tale Heart” be considered a ghost story? I was inclined not to, and then my husband pointed out that it is all about the dead returning to confront the living — albeit in a psychological sense. So yes, it can be encompassed in the genre, I think. (Who would want to exclude such a terrific story, if you didn’t have to?)

Guilt is one of the powerful drivers of a ghost story. The ghost may return to avenge its murder (as “The Tell-Tale Heart”, Stevenson’s “The Grave Robber”, Le Fanu’s “The Familiar” and many others). Or the ghost may be the guilty party, tormented and driven to reveal its crime (Le Fanu’s “Madame Crowl’s Ghost”), or simply tied to the scene of its crime as punishment. Sometimes the ghost, who when alive was guilty of terrible crimes, continues to commit his evil deeds as a malevolent spirit (“The Judge’s House” by Bram Stoker; “Count Magnus” by M. R. James).

There are ghosts (fearsome but not malevolent) who warn of impending death (Le Fanu’s “The White Cat of Drumgunniol”; Dickens’ “The Signalman”) — similar to a banshee, although in the Le Fanu story, at least, the spirit cat differs from a banshee in that it began to haunt the family as the result of a deadly crime and continues to haunt the innocent descendents of the perpetrator.

More discussion of what makes a ghost story, and what the ghost story implies, to follow.

2 thoughts on “What is a ghost story?”